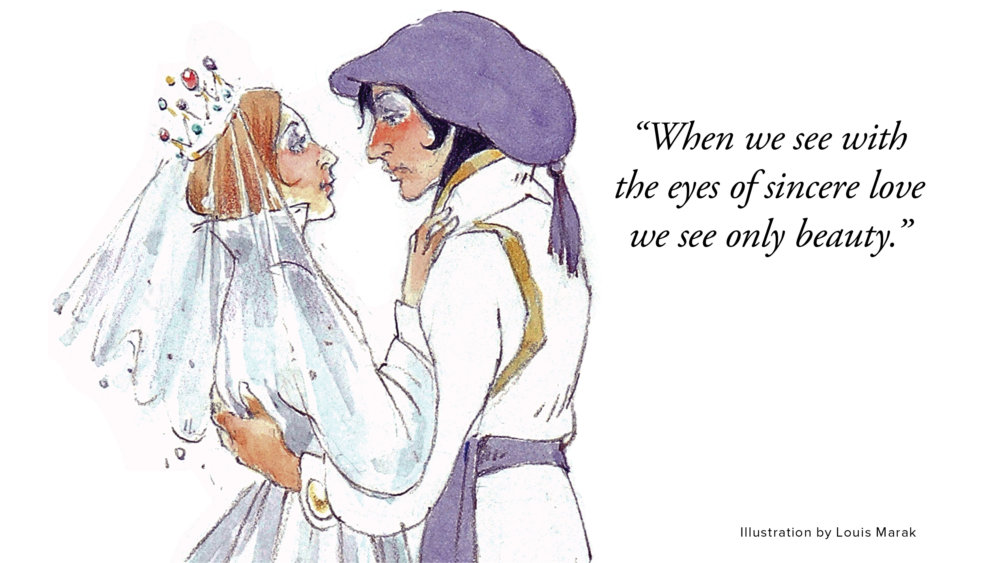 Prince Benvenuto has the misfortune of being born with two noses. His parents, the King and Queen, are in despair fearing that when he is ready to marry he will not be able to find a young woman who truly loves him.

Finally, the day arrives when Benvenuto confides that he is in love. His parents are in disbelief when Gelsomina, when she is probed about her love, says that she loves the Prince as he is. Is she sincere? Or is she marrying him so she can be a princess?

The worried parents ask their most trusted advisor to help them decide. Here are his words of wisdom.

It was beautiful, but it definitely looked strange to them. Was the girl lying to them? That would not be acceptable. Or was it possible that the Prince’s second nose really was not significant to her?

They again conferred with their advisors who passionately discussed their disbelief that Gelsomina seemed unaffected by the Prince’s two noses. Finally, the King addressed his oldest and most trusted counselor.

“My dear friend, you have not spoken up. What is your opinion?” The other men fell silent. What would this learned man have to add to the discussion? Respectfully, they turned to him.

The oldest counselor sensed some skepticism. But he knew what he knew and what he knew was the wisdom of the ages that is true for all people and all times.

He cleared his throat and spoke, “Your Highness, honorable gentlemen, I have listened to your wise discourse. Now, as you have asked, here is my opinion.

The Prince has two noses. This is a fact. The maiden says the second nose is of no consequence to her. That is also a fact. Can these two facts be reconciled?”

“When we see with the eyes of sincere love we see only beauty.”

The room was deeply silent as each counselor pondered this wisdom. They looked around at each other, and with a collective sigh of relief, they smiled. The King and Queen embraced. Soon the room filled with sounds of joy, as plans for the marriage ceremony were discussed.

The wise old Counselor, with a twinkle in his eyes, added these final words:

Let us resolve that from this day forward, our land will be known for its tolerance and respect for everyone. On the wedding day of Benvenuto and Gelsomina, let us celebrate the unique beauty that is in each of us.

This is the last section of Benvenuto and Gelsomina: A Love Story, a children’s picture book by Jack Jonathan and Sheelagh Hope with illustrations by Lou Marak. It is available for sale on theriverlagan.com.