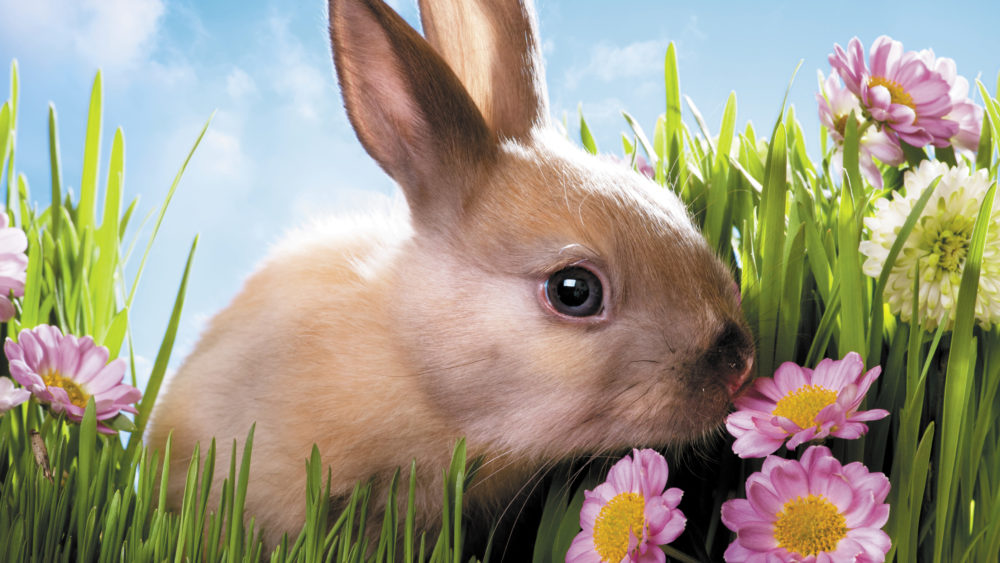 Many years ago, I stepped out of my apartment into a wood to enjoy the sunset. In the middle of the trees was an intimate circle of grass – a Fairy ring? No, not fairies – rabbits – a circle of small grey and brown urban rabbits, I chuckled.

Shortly after all had assembled, the woods filled with the murmur of gentle clicks and purrs. It was like a parliament– with each rabbit taking a turn to offer an opinion on some important rabbit matter. I sat on the sidelines watching until the sun went down.

Later, when I moved to a house, rabbits were an ever present part of my garden – not welcome – eating my spring plants just as they sprang up from the warming earth and later, eating all my vegetable greens. I engaged in a full-scale war with these invaders. They won… Every year they won!

Soon my garden belonged to a rabbit colony. On summer evenings the front lawn hosted a group of does. We called it a “quilting bee.” The back garden was the meeting place for the bucks. One night I saw a “grandfather” rabbit lying around like a Roman senator, supervising a fluffle of bunnies. More rabbits arrived and soon, there was a “congress” of them. Cute it was NOT!

It was time to take action. I called a fencing company and had the back garden bunny-proofed. Okay, I had I forgotten how Peter Rabbit dug under Mr. McGregor’s fence. So more deterrents were added to prevent digging under the fence. Finally, after Bella, a terrier came into my life the spring flowers survived the season. The front garden was left open and with the help of Bunny-Be-Gone I had summer flowers as well.

This morning Bella and I came upon a tiny little ball of fluff the size of my palm. Little ears back, little body shivering in fear, he was immobile on the sidewalk. I picked the little fellow up and placed him under a bush, hoping his parents had a warren there. It did not escape me that two months from now I would curse that little being as he munched on my hostas.

Here is the curious part of the war between the rabbits and me:

A baby rabbit evokes my caretaker response. Yet, being overwhelmed by a colony of rabbits stirs me to take protective measures. It takes discernment to act in a way that honors not only the rabbits’ place in my world, but also my right to grow food for the family or create beauty for neighbors.

This is what makes us human – our ability to hold two emotions or ideals in our minds at the same time, and then be discerning about what action to take that honors both points of view.

Rabbits! They bring out both the nurturer and the hunter in us.